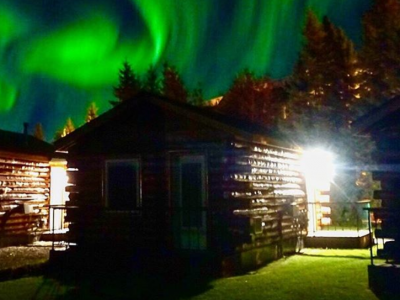 THE HISTORY OF PIKE’S

Pike’s Landing is in an historic spot on the Chena River in Fairbanks. It is named for Lloyd Pike, who homesteaded the area under the U.S. Homestead Act shortly after World War II. At this time it was miles and miles outside of Fairbanks. Mr. Pike later sold part of his homestead to assist in the construction and creation of the Fairbanks International airport.

Mr. Pike built Pike’s Landing in 1959, the year Alaska obtained statehood. The floodwaters of 1967 washed the restaurant down the Chena River. In 1969 Lloyd Pike rebuilt the log structure you see today. In 1979 he sold the restaurant to Don Pruhs, who operated it during the colorful pipeline days. The story goes that Don Pruhs paid the mortgage with the jukebox and put his kids through college on the pool table money. Guy and Lillian Kasnick purchased Pike’s Landing in 1985. They created the fine dining room and added the 400-seat outdoor patio and atrium, open from spring until moose-hunting season. The current and fourth owner, Jay Ramras, bought the property in 1999 and opened Pike’s Waterfront Lodge a year later with 180 rooms, adding the 28 cabins, mini miniature golf course, bocce ball courts, greenhouse, maintenance facility and paved walkway between Pike’s Landing and Pike’s Waterfront Lodge in the following years.

THE PROPERTY HAS GROWN TO INCLUDE:

Pike’s Waterfront Lodge is family-run; we review all customer comments and attempt to incorporate suggestions into the hotel and its operations. Pike’s takes great pride in being dog and people friendly, but not necessarily in that order! We have a new guest comment program that will send an email to guests asking for the feedback. We also have paper comment cards if that is what you prefer.

A focal point of Pike’s Waterfront Lodge is our stunning art collection, unique among Alaska hotels. The art collection focuses on Alaska subjects by Alaska artists, and is constantly changing. Many of the pieces are museum quality and several have been shown nationally in touring art shows.

View photo
Message successfully sent
Sorry, we could not complete your request, please try again later.
Send a message to