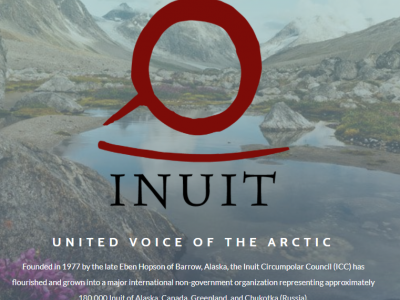 Founded in 1977 by the late Eben Hopson of Barrow, Alaska, the ICC has flourished and grown into a major international non-government organization representing 180,000+ Inuit of Alaska, Canada, Greenland, and Chukotka (Russia).

To thrive in their circumpolar homeland, Inuit had the vision to realize they must speak with a united voice on issues of common concern and combine their energies and talents towards protecting and promoting their way of life. The principal goals of ICC are, therefore, to strengthen unity among Inuit of the circumpolar region; promote Inuit rights and interests on an international level; develop and encourage long-term policies that safeguard the Arctic environment; and seek full and active partnership in the political, economic, and social development of circumpolar regions.

ICC holds a General Assembly every four years at which delegates from across the circumpolar region elect a new Chair and an executive council, develop policies, and adopt resolutions that will guide the activities of the organization for the coming term. The General Assembly is the heart of the organization, providing an opportunity for sharing information, discussing common concerns, debating issues, and strengthening the bonds between all Inuit. Representatives from the Inuit Circumpolar Youth Council and the International Elders Council attend, thereby improving communications and creating synergies with these important affiliated organizations.