The Goddess of the Sea: The Story of Sedna

Article by:
The Canadian Encyclopedia 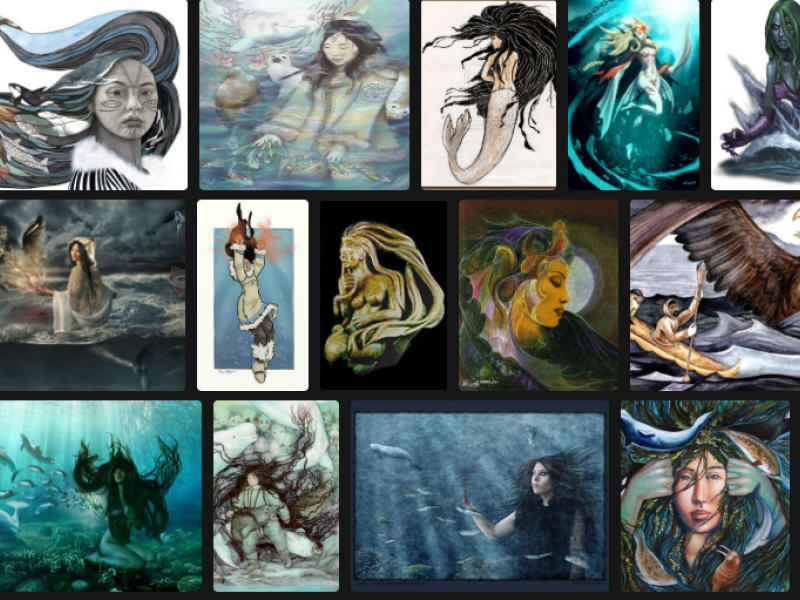 Inuit mythology is the repository of Inuit culture, passed down by elders through generations to enrich and enlighten. The fluid nature of oral culture means details of certain myths are also fluid. Among the most famous of the vast array of myths is the legend of the sea goddess known as Sedna, Nuliayuk or Taluliyuk. The artist, author and filmmaker James Houston spent years in the Arctic, immersed in Inuit culture. Below he shares his firsthand experience.

Once, on south Baffin Island, I saw this myth come alive. Some young children were playing near a tidal ice barrier with many dangerous hidden cracks. Their grandmother crept with great care down among the ice hummocks and from a hidden position called out, "Oohhwee, Oohhwee!" The children ran back onto the land and said the sea goddess Taluliyuk had frightened them. Later, the grandmother said, "I told them about the woman who lives under the sea. Now she will keep them away from the dangerous places." The grandmother was referring to the powerful sea goddess in this central Arctic song:

That woman down there beneath the sea,

She wants to hide the seals from us.

These hunters in the dance house,

Into the spirit world

Where no humans dwell.

Set matters right will I.

Set matters right will I.

The legend of the sea goddess, though known in various regions by different names, is one of the most widespread of Inuit myths. One version is that some time ago, during a violent blizzard, a handsome young stranger enters a family igloo wearing a necklace with two large canine teeth. He is welcomed into the bed and sleeps with the entire family. When they awake the next morning, the young man is gone. The father, seeing only animal tracks outside, says, "We were deceived. That must have been my lead dog disguised as a man." When his daughter becomes pregnant, the father, ashamed of what she might produce, makes his daughter lie on the back of his kayak while he paddles to a small island where he abandons her. In some versions of the myth, her lover changes into a bird and flies her to the island.

Alone on the island, the girl receives tender pieces of meat from the lead dog, who swam out to provide for her. She gives birth to six young; three are Inuit children, but the other three have bigger ears and snout-like noses. The young mother sews sealskins into one large slipper, places the three strange children inside, and pushes them off the island toward the south, calling out, "Sarutiktapsinik sanavagumarkpusi'"(You shall be good at making weapons). Some Inuit say that European and First Nations peoples are descended from those three dog children and only through them are they related to the Inuit.

The second part of the story, usually told on the following night, tells of the father going in an umiak, a large skin boat, to take his daughter off the island. On their way home a storm rises, threatening to capsize the overloaded boat. The boatmen decide that to lighten the load they must throw the daughter overboard. When she tries to climb back into the boat, her father cuts off her fingers. These fingers become seals in the sea. She tries again and he cuts off her hands, which become walruses. She makes one last attempt to climb aboard the boat but her father cuts off her forearms, which transform into whales.

Cast out of the boat for good, the girl sinks into the depths of the sea and becomes Sedna, or Nuliayuk or Taluliyuk, the woman who controls all sea beasts and is half-woman and half-fish. Sedna is a centrally important goddess for the Inuit, and is said to hold sea animals entangled in her hair, only to release them when she is appeased by offerings, songs or a visit from an angakok (shaman). Many songs are sung to this powerful goddess and in new seasons, pieces of the liver of the first-killed sea mammal are returned to the waters, imploring Sedna to release her bounty to the hunters so that they might feed their families. The angakok may visit Sedna in a trance, where he hears of the taboos and disrespect inflicted on her by the people, and soothes her by combing her hair with a bone comb. 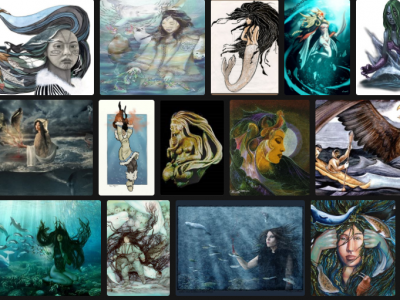